The Nordic Society is an independent and non-profit association for researchers in the Nordic countries (Denmark, Finland, Sweden and Norway) working on the Middle East and covering subjects in the humanities and social sciences, from antiquity to the present day. The associational conference takes place every third year in one of the four Nordic countries.

In September 2016, the Centre for Contemporary Middle East Studies at the University of Southern Denmark hosted the conference in Odense. “In the past decades, the exploration of the formation of modern subjectivities has developed into a core field of the humanities and social sciences. This strand of research is asking for social practices and codes; it investigates competing bodies of knowledge, social performances and emotions; interprets textual and visual forms of discourse; analyzes the interrelations of social practices with material artifacts and means of communication; observes individual forms of subjectivity as well as the interaction in social fields and classes.”[1]

Dr. Chrabieh presented a paper on the Gulf panel entitled “Voices of Peace through Arts in the UAE: Middle Eastern Studies’ students perceptions of Islam.” She introduced the audience to the preliminary results of her ongoing qualitative research at the crossroads of Peace Education, Sciences of Religions and Art History on perceptions of Islam as it relates to Peace by 160 university students enrolled in Middle Eastern Studies courses at the American University in Dubai. The results of this research were compared to those of a previous academic inquiry Dr. Chrabieh conducted from 2007 to 2014 in three Lebanese universities with 3000 students.

According to Dr. Chrabieh, Art has an important role to play in the pursuit of peace, and is an amazing way to channel a sense of collective urgency such as through the Peace Art in Dubai project she implemented at the American University in Dubai. “As a result of various activities – art workshops and events, online exhibition, outdoor agoras -, students have been able to create individual and shared spaces and expressions through various media and art techniques that helped them debunk stereotypes of Islam, better understand each other’s beliefs and practices, and become active agents of peace.”

The Peace Art in Dubai project is an application of Dr. Chrabieh’s Peace Education approach which aims to cultivate the knowledge and practices of a culture of peace. So far, her Peace Art in Dubai blog features more than 160 artworks. She adds, “Students’ positive feedbacks at the end of every semester encouraged me to pursue this project, as well as the recent changes to the federal government ministries in the United Arab Emirates, including the establishment of a Ministry of Tolerance with a clear message calling citizens and expatriates to be agents of peace and to help the government in its task, first internally, and second, in exporting the model outside of the Emirati boundaries. Hopefully these new measures will contribute to call attention to the importance of peace education initiatives already taking place and open the door to the establishment and officialization of peace education programs in schools and universities.” 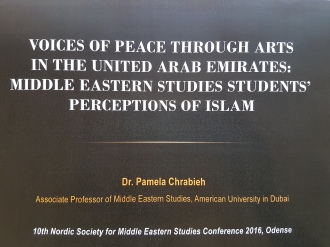 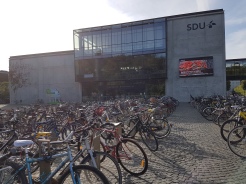 Like Loading…
← Voices of Peace through Arts in the United Arab Emirates
→ Shifting Identities, Changes in the Social, Political and Religious Structures in the Middle East